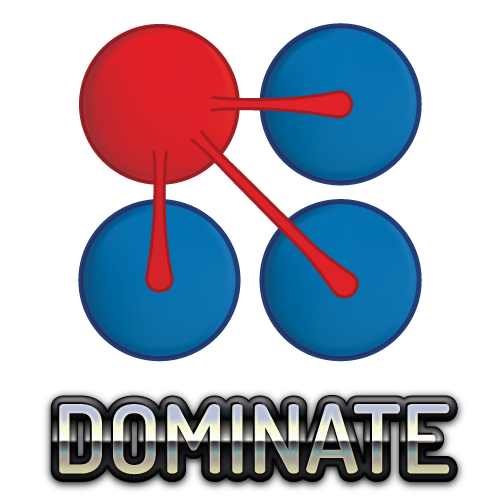 Dominate is an abstract strategy board game played on a 8x8 board.

Dominate - Board Game Dominate is an abstract strategy board game played on a 8x8 board.

Dominate is an abstract strategy board game that involves play by two parties on a eight-by-eight square grid. The object of the game is to make your pieces constitute a majority of the pieces on the board at the end of the game, by converting as many of your opponent's pieces as possible.

Based on an early 90's arcade game and is also similar to old games like Boogers, Slime Wars and Frog Cloning.

MOVEMENT
When it is your turn to move, simply select the piece that you wish to move by clicking on it. Once the piece is selected, touch an empty square on the board you want to move to. A player must make a move if one is available. Some squares contain a block and cannot be captured.
It is possible to move one space in any direction or jump two spaces horizontally or vertically as long as the the destination is empty.
- If you move 1 space, you clone the piece.
- If you jump 2 spaces, you move the piece.

SCORING
You get 1 point for each piece you have occupied when the game ends. If you improved on your highest score for the current level, your new score will be displayed.
You get 100 points (200 points for boss levels) if you own all the pieces on the board when the game ends, regardless of how big the board is.